I first got a key to Beddington Farmlands in 2007 the same year that the Glaucous Winged Gull was found. I have to admit that at the time i had no idea what a Glaucous Winged Gull was but its amazing how quick you learn from the birders around you. The best year was definitely 2010 when I ended the year with a list of 154 birds!! I don't keep records of when I have seen birds so if you asked I would be hard pushed to give you exact dates of when I had seen stuff, but my back up plan is Frankie as he always seemed to know when stuff had turned up. An amazing encyclopaedic knowledge for dates!!
I set myself the target of 200 birds when I first got my key and in late 2016 I reached that target. There can be nothing better than self finding your own birds. Just that joy as the bird fills your binoculars or camera lens. And i'm sure there can't be an even better way to reach 200 birds then a self found first for the farm. The bird in question was a Yellow-browed Warbler, there had been an influx of these little birds down the entire East coast so it wasn't a complete shock that one had finally made its way to the Farmlands. I first heard it on the Friday when it called a couple of times further up the North lake. I put the news out but no-one managed to track the bird down and then after the weekend when I returned to the farm it started calling and then popped up in the same tree that the Black Redstart had been in.
Don't think though that it has been an easy target to achieve, my almost constant companions during these years have been Frankie and Swifty, the three of us have put so much time in during those years and lets face it for the most part with little to show for our collective efforts. Hours upon hours waiting and watching with the odd highlight which would last for a couple of minutes in total, but when the birding gods were smiling it would be amazing.

Here are two days that really stick out for me:

The first was 2nd May 2010 during our annual Bank Holiday birdwatch. The weather had been forecast as a North East wind overnight and a wet front coming in from the North around 10 am. I met up with Frankie and Grant in the hide at a ridiculous time and it wasn't long before we were rewarded with an arrival of Bar-Tailed Godwits that came in from the East and not far behind them was a mob of Ringed Plover and Dunlin.


There were various other waders and terns flying through when I then picked up a single bird coming in from the East i started taking pics and various calls of ' golden no grey, no golden no grey plover ' were heard. Luckily the bird landed at Barnes and was identified as a Pacific Golden Plover!!! The last one recorded in Surrey was shot on Wimbledon Common some time in the late 19th Century.


It was an amazing morning. As soon as the rain started though no more birds of note came through. If memory serves me right it was all over within 3 hours, but 3 hours that won't be forgotten.

The second day that really sticks out is the 1st December 2010, there had been some heavy snow over the previous week and it was starting to push birds from their wintering grounds. I was in the hide with Johnny ( remember him ) and Frankie. Frank decided to go for a pee and in true friendship I thought it would be fun to throw a snowball at him, I bent down picked up some snow, made it into a ball and was just about to throw it when I saw a line of geese going East, i shouted ' GEESE' and I still don't know how but Frankie stopped mid stream and the three of us stood and stared as 10 Bean Geese flew over. After watching them disappear I walked back to the hide looked up and there were 2 Goosander going over and then a Grey Plover going North. Again even though it lasted about 5 minutes it will never be forgotten.

What was also amazing that day was that several Pink Footed Geese were seen at Holmethorpe. Shame they didn't come over as well.

Memorable birds usually just fly through. As opposed to memorable days when there seems to be something going on all the time.

On the 5th December while standing on the Taliban ( the failed Sand Martin breeding bank ) the gulls had gone up and this usually means a raptor somewhere. I scanned the gulls and saw nowt, then Frankie said ' Lads, i've got a faking Crane!! ' and there in the middle of the gulls was this beauty. 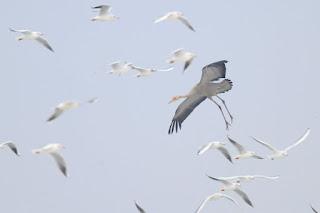 During that December spell on the 20th again while standing in the hide I could hear the unmistakable jingle of Waxwings. They flew over the hide and settled in a tree just long enough to get some pics

There have been other birds that have been amazing, Honey Buzzard flying past so low I could count individual feathers, Short-eared Owl taking of a couple of feet in front of me as I was walking around the mound, 2 Bearded Tits causing me panic when they peeped once but then nothing for another hour or so and in 2016 I had an adult Sabines Gull which is mind blowing in itself


But was is amazing is that the birds are still coming through even in 2017. Devil Birder has proved that if you watch a piece of farmland for long enough then you will get good birds as he has so often at Cannons Farm just down the road. In Randoms Ramblings,  Neils Blog he has an award ceremony each year - he mentioned that Beddington always gets the highest year list total - I feel though that that title will probably move to Tice's Meadow in the near future, unfortunately our current landlords at Beddington don't look too favourably towards wildlife, in fact I would go as far as to say that as a company they have a hatred of wildlife. They have systematically ripped up all that was good at Beddington often citing ' operational needs ' as their modus operandi. Cutting down an Elder copse, a tree that is famous for its shallow roots so as not to disturb archaeology of an already excavated villa, even though the copse had over wintering Long-eared Owls and Woodcocks present. They have single handedly destroyed the largest population of Tree Sparrows in the South of England a bird that is a Red data species by removing almost all the habitat the birds depend on. The restoration of the farmlands is now so far behind schedule its beyond a joke and just shows their disregard for wildlife. They often allow the rubbish from the tip during East winds to blow down the slopes into the water courses and pollute the lakes and only make a half hearted attempt to clear the rubbish after complaints. They have sluice gates that are installed under water!!! Because they couldn't get the very basics correct and their levels right so the water level can't be controlled which means that every Spring we watch ducks nests get swept away by rising water levels. The restored North lake with its wader scrape that has no where for waders to land as its full of willows and purple loosestrife. The man behind the North lake restoration on the last day of works said that it was a disaster and he was contracted by them!! Even the ecologists on site make one raise an eyebrow - I'm reminded of one person asking if we had seen any House Martins breeding in the Sand Martin Bank in February!! WTF. I think its quite obvious that as soon as they can they will be selling off 100 acre and the South East corner for development, why let all this green crap get in the way of money. I could go on about them but they are all just nasty horrible people with money as their mistress and I think you get the point.

Unfortunately this is a common problem for wildlife now. Big companies are given free reign to exploit an area with little in the way of mitigation for the local area or wildlife. We will see this kind of destruction Country wide as fracking and population densities take their toll on our green spaces.

Im just glad that i managed to reach my target of 200 birds as it will just get harder and harder to see so many birds at the farm. 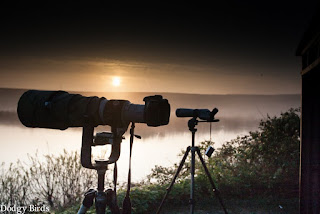